Cross Platform Advertising: The good, the bad & the ugly 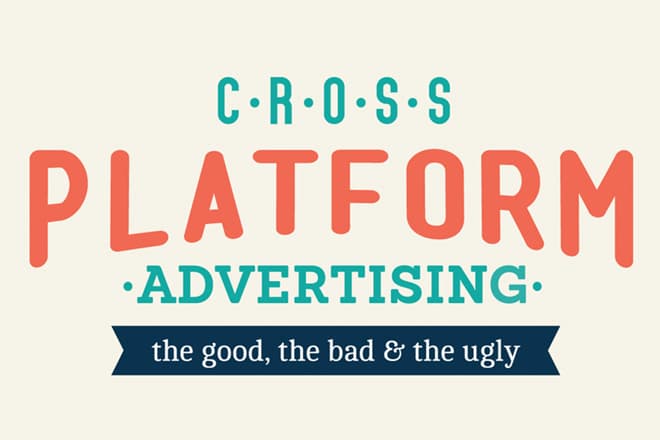 In a perfect world, one advertisement would display beautifully on ever y device and medium. But, if you’ve ever witnessed the “ugly” side of online advertising, you know this isn’t the case. A full size desktop ad rendered on a small-screen mobile device isn’t pretty. But, you’re in luck. There are certain cross platform tips and tricks that will ensure your advertisements look their best, no matter the screen, device or medium they’re viewed on.

Flexible in Size and functionality

And the bad thing?

Ignoring other device limitations could mean the ad won’t function for your entire audience. The biggest drawback of website ads is that mobile and tablet devices that can view them can still render the full size ad. This can be particularly troublesome if the ad contains flash animation or is a pop up ad.


If your website has a large flash animation ad on its homepage, that same animation will not work on an iPhone or iPad.

Using HTML5 and jQuery instead of flash is a solution that will resolve this. If you have to keep flash on the website, have an alternative ad display that shows when the site detects a mobile device is viewing it. It will replace the flash ad with a graphic or alternative content displaying similar messaging.


While these work fine for a website, they do not scale well when a user is trying to access the full website from a phone browser.

This type of ad is typically considered the most annoying type of ad to receive whether on a website or on a mobile device. If you have to use a pop up, make sure that it scales in multiple devices. This can be done with jQuer y and other scripting languages.

And the bad thing?

Different mobile devices have different screen size limitations and different apps are built for different platforms, which increases the cost of maintaining and rotating ads throughout an app.

Mobile ad space is highly limited on phones and tablets. So, an advertiser has to get the same message across with minimal space available. Here are a few pointers for getting around certain difficulties for each device.


A mobile app for your phone has far less real estate than the app you downloaded for your tablet. The same is to be said of a Galaxy Note phone vs. an iPhone vs. a Galaxy Nexus phone.

Make sure your code is aware of what device it is on so it knows what version of the ad to display. This is imperative if you want to maximize your available real estate.

All apps are not equal


Another big issue with mobile apps is that they require different types of development. An Android phone is typically programmed in Java, while Apple tablets and iPhones are in iOS, and Windows phones are in c#.

There are a lot of tools available in the industr y that are “code once, deploy everywhere” solutions. Appcelerator, Phonegap, and Xamarin are great examples of software that allows a developer to build once and deploy anywhere. This can centralize where someone would edit and update your ads, thereby reducing overall costs to make them.

The importance of planning out how an ad is built and deployed upon every device is still a major issue in the industry. By applying some of the techniques above, one can reduce their overall costs and spend less time getting an ad up on the web and more time reaching the broadest audience possible.