Four Yokels, A Rocket and the Virtuosity of Video 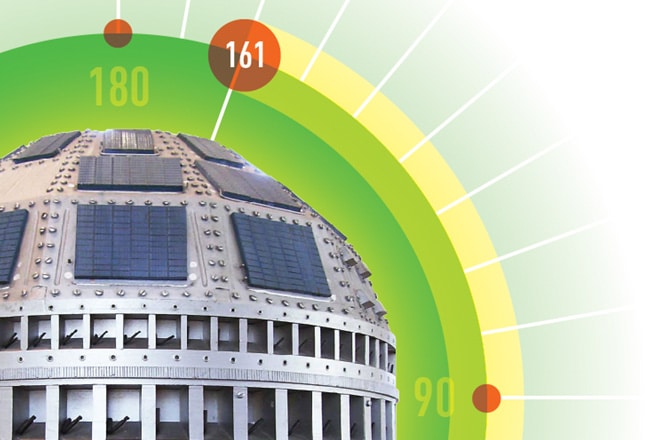 “Come and listen to my story about a man named Jed. A poor mountaineer, barely kept his family fed. And then one day he was shootin’ at some food, and up through the ground come a bubblin’ crude. Oil that is. Black gold. Texas tea.”

Such was the face of entertainment in 1962, when Buddy Ebsen, Irene Ryan, Donna Douglas and the supporting cast of The Beverly Hillbillies made it clear to America that inserting poor, bumbling, uneducated dimwits into the lifestyle of the rich and famous was utterly hilarious. The medium was television, and this unlikely concoction shot to the top of the Nielsen television ratings shortly after its premiere, remaining there throughout its first two seasons.

Amazingly, the show did not fall out of the top 12 until its penultimate year on the air. But while these characters were enjoying the spoils and riches wrangled out of gooey black soup from deep within the earth, an epiphany for advertisers and entertainers alike was occurring 650 miles above it. Two months earlier that same year, the communications satellite Telstar1 had relayed the first ever live transatlantic television broadcast, sending a live video feed of then President John F. Kennedy across the pond to discuss the strength of the U.S. dollar.


My, how times have changed.


Today, there are literally hundreds of communications satellites orbiting the earth, each transmitting and redirecting digital signals for many technologies, including faxes, telephone, radio, television, the Internet and, finally, high-definition video.

Video has become the “black gold,” as it were, for the digital age. Similar to raw petroleum passing through a refinery, video is manipulated, compressed, recompressed, repurposed and redistributed for an almost unimaginable variety of uses. And, generally speaking, technology has progressed such that slow processors, low-bandwidth bottlenecks and inadequate storage devices no longer hamper the delivery of the medium. Even mobile devices and networks are now capable of very good performance.


Video isn’t everywhere yet, but it almost is.


The sheer quantity of creative agents available for video makes one wonder if this transition will occur sooner rather than later. For nearly half a century, video production was virtually unattainable by the common man. Only gigantic television and film studios could afford the equipment necessary to capture, edit and broadcast the stuff. Those days are already a fading memory, and today, a mere $600 can buy a camera capable of very high-quality audio and high- definition video. Adequate editing software is available for less than $200. And broadcasting video to the global masses? Well, that can be accomplished for free.

Though it is true that the vast majority of quality, purposeful video material is still distributed by studios backed by hundreds of millions of dollars, there exists today one special little critter that has spun the rules into a convoluted twister that would have entangled Granny’s apron around her like a straight jacket and kicked Jethro’s rear end clear back to Missouri. The critter is a little company called YouTube, now an online video behemoth taking the unbelievable step of making video publishing available to virtually anyone with access to the Internet and a digital video file.

The YouTube “channel” has developed into the de facto standard for user-generated video content. The 100 million video views per day have certainly caught the attention of studios. In addition to housing truckloads of user generated content, YouTube is also becoming the go-to destination for professional musicians, television and film studios, and many other sophisticated marketers to promote their wares.


A quick look at CNN.com during the week of October 19, 2009 revealed an all-new design for the world news juggernaut. The new design features a three-column layout with a center column conspicuously broader than either of the two flanking columns. That breadth, it would seem, is to accommodate the prominent high- definition video content that appears at the top of that column for up to 50 percent of each day. CNN hasn’t yet assigned full-time responsibilities for that space to deliver video content, but it is clear that quality, on-demand video is poised to take over a substantial amount of the  available space at CNN.com.

A scan of the global navigation for CNN.com bolsters this thought, for the second tab is now “Video,” which unsurprisingly leads to a virtual library of on-demand video footage in high definition from around the globe. Adjacent to “Video” is a tab for “NewsPulse,” a new component that lists all available news stories in order of popularity. Of the more than 1,000 daily stories, over 450 articles feature high-definition video at the very top. That’s almost 50 percent of the content that features video prominently on the page.

The other news giants don’t seem to have quite the same zeal for video—yet. However, Foxnews.com does devote the top section of the right column of its home page to direct links for wide-format content. It’s difficult to find a link to video at LAtimes.com, but that’s a newspaper site, right? Once the link to video content is discovered (well below the fold), the pay-off is served up in a 620 x 350 pixel-wide format frame with an option for full- screen playback. NYtimes.com also positions its link to moving pictures below the fold; however, by clicking the “Video” link on this page, users navigate to a separate site altogether, one with a slick interface and an extensive library of video content deemed newsworthy by The New York Times and its readers.

The news channels are not the only mass-market information sources moving their video content to the forefront. Major league sports sites have also elevated video as the predominant information source for their users. A quick scan of all four major sport websites – NFL.com, NBA.com, NHL.com and MLB.com – reveals direct links to video footage in as much as 50 percent of the available home page real estate, and ESPN.com, the No.1 source for sporting news, has now been featuring online video content for years.

An entire category of video “How-To” has emerged in recent years, spawning sites dedicated to training the masses—via video tutorials, of course—to accomplish a range of mundane tasks, from tying a necktie to properly installing a shower curtain. These sites comprise an expansive mixture of user-generated nonsense and professional, relevant material all packaged within web properties such as eHow.com, Howcast.com, Wonderhowto.com and Videojug.com. Not to be outdone, the major television networks now provide incredible online libraries of full-length episodes from many of their programs, all presented on- demand in commercial-limited or commercial-free high definition.


Let’s return to 1962 and the advertising opportunity orbiting the earth at some 17,000 miles per hour. That first communications satellite and the hundreds that have followed have built the backbone for the most powerful catalyst for human communication and connection: video. Because of the multi-sensory characteristics of video, it is by far the single most capable medium for connecting developers to users, manufacturers to consumers, and sellers to buyers in a digital world.

In order for advertisers and marketers to accomplish these ends effectively, video must follow a formula of sorts. People desire to experience their emotions at the surface. They want to laugh; they want to cry; they want to feel fear—even if those emotions aren’t necessarily grounded in reality.

The experience itself is justifiable as a means for satisfaction and contentment. In a word, people want to be entertained.

Having understood the importance of entertaining consumers, marketers must also realize that people don’t care to be “schooled.” They have no desire to be “educated” on any matter. They do, however, want to be enlightened. They want to be empowered with information that was once lacking. Valuable information is easier to both deliver and receive if the recipient has already reached a comfort level with the source, so it is up to the source to create an emotional appeal that puts the recipient at ease.

By establishing this trust, marketers can complete the final part of this formula by persuading the user toward some target goal. Persuasion occurs only once a person has experienced the proper emotional arousal and has received the proper information to then ask appropriate questions. Conviction to a concept that was once foreign is the Holy Grail for advertisers and is a goal that cannot be achieved by merely hurling facts at people. Changing people’s minds requires a tremendous effort that must be built upon trust, mutual respect and understanding.

Video on the web certainly follows the tenet that “content is king.” For advertisers, the mere presence of online video cannot become synonymous with success. The medium is no longer a novelty; instead, users are looking to the content and the message before judging the value of the piece.

Whether collected in specific-use libraries or streamed into online display advertisements, effective video content will be purposeful. It will be approachable. But first and foremost, it will entertain.

Regarding the use of video, advertisers can take a cue from the Clampetts, who recognized that the proper allocation of an exceptionally vast resource would require an equally vast change of scenery.

“Well, the first thing you know ol’ Jed’s a millionaire. The kinfolk said, ‘Jed move away from there!‘ Said, ‘Californy is the place you ought to be.’ So, they loaded up the truck, and they moved to Beverly.”