Insider Tips for Digital Out of Home 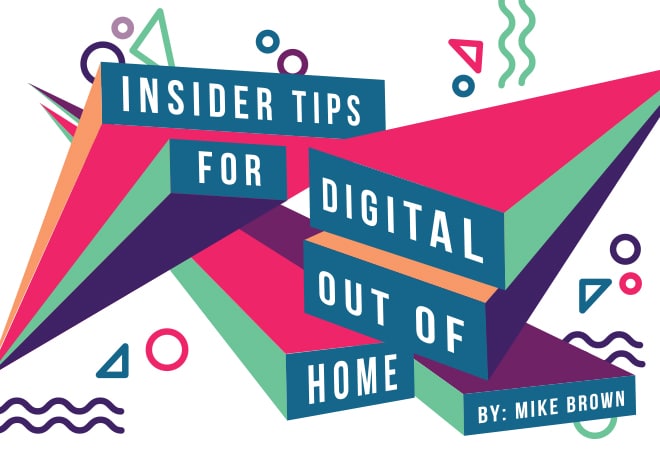 The power and resolution of digital out of home (DOOH) displays have become impressive in recent years. Unfortunately, impressing people with a DOOH display has become harder than ever. There are a few reasons for this, but the big one is ironically rather small — the smartphone.

Fortunately, if used correctly, DOOH displays have some distinct and powerful advantages over their diminutive competition. But before we examine those, let’s take a look at what makes the competition so formidable.

It’s become a trope, but it’s true. Walk down any busy city street, ride public transportation or sit in a coffee shop, and 80 percent of the people you encounter will be staring at their smartphone.

OK… that’s not really “true.” That 80 percent statistic is totally made up. But it feels true, doesn’t it? That’s because, if we’re honest, most of us do it all the time.

Let’s be clear, this is not another article bemoaning smartphones for unraveling our social fabric and turning us into a society of zoned-out selfie-snapping zombies. On the contrary, smartphones are amazing!

Smartphones Are Omnipotent. (I Know Because Siri Told Me.)

With your smartphone, you can find out almost anything you could possibly want to know in seconds; from what your college roommate’s kid got for her birthday to the name of that actor in that film with the other guy. You can also to directions from where you are right now, to literally anywhere.

You can also watch movies, sports or play (for all practical purposes) a near infinite variety video games, all in real time with crystal clear resolution. You can also surf the ‘net, listen to a podcast, read a book, learn Finnish… the list never ends.

Smartphones allow us to chat with friends via text message or through half a dozen various social media apps. Facetime, Skype and similar apps let us talk to loved ones or perform a job interview with people halfway across the world. And if push really comes to shove, you can even use your smartphone as an actual phone.

The Problem Is, No One’s Ever Bored

In the past, display ads were most effective when they gave people a momentary relief from boredom. A decade or so ago it was easy to grab someone’s attention on the street, because they had nothing else to do.

The following are three ways marketers can use DOOH displays to do just that.

The biggest advantage a DOOH display can have over a smartphone is a size advantage. Our brains are wired to find big things impressive (mountains, bears, NBA players, etc.) That’s one of the reasons that, even though most of us have a hi-res, flat screen TV at home, we still love going to the movies.

The “Hamilton County We Thrive!” DOOH experience is a great example of how size and graphics work together to attract attention and encourage engagement.

This interactive display was basically a quiz on health issues — not the kind of test people typically take voluntarily. However, because of the towering display, arresting images and fun user experience, people not only took the quiz, they had a blast doing it. 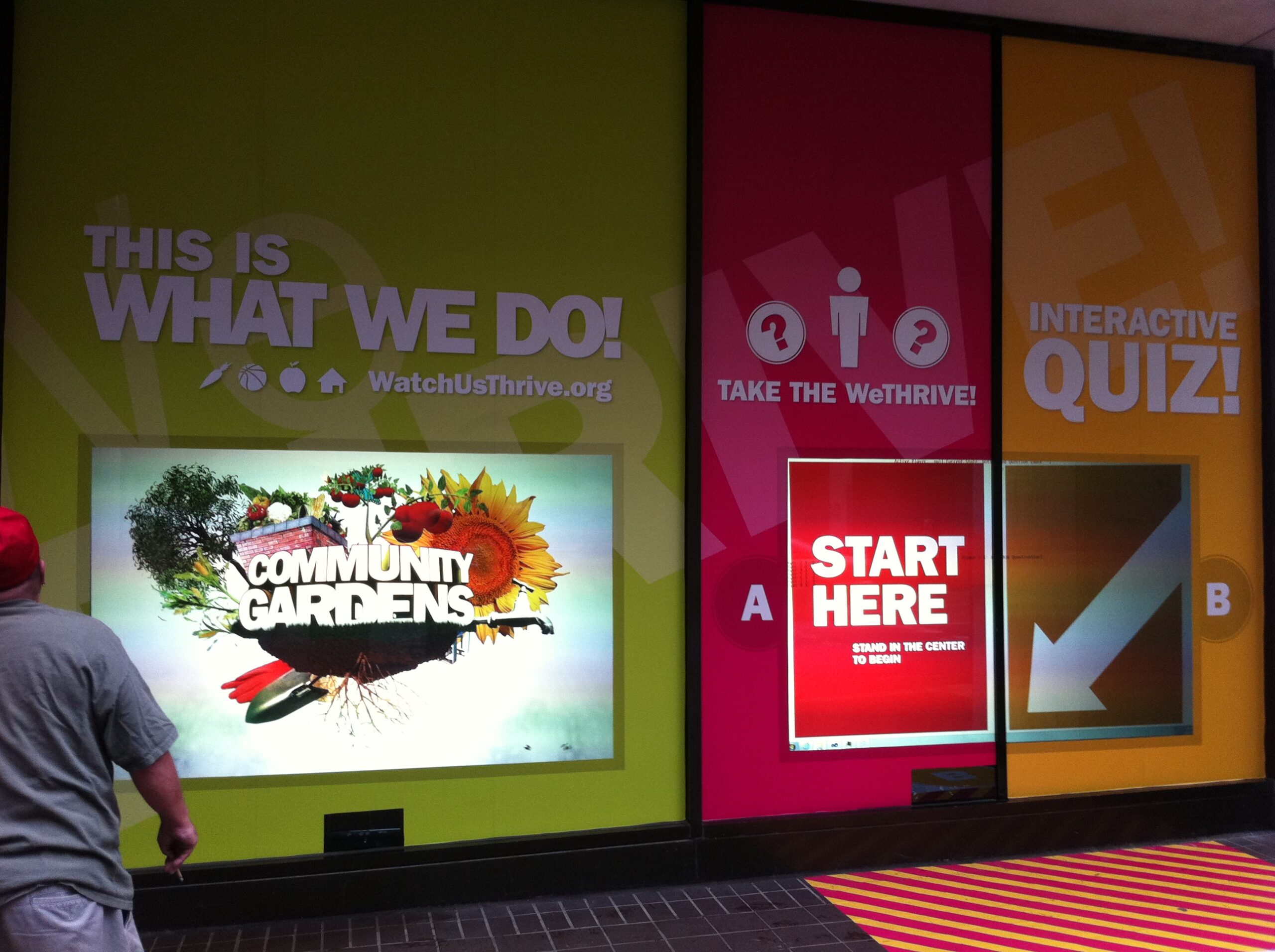 As great as the “Hamilton County We Thrive!” experience was, however, you don’t necessarily need to build a fully interactive DOOH display to effective. There are large digital displays in almost every city, which brands can post content to for a price.

Be warned, though, size is relative. Even an incredibly large display is likely to blend into the bright, flashing scenery in places like Las Vegas, Time Square, Tokyo or even some sports stadiums. Then (in a best case scenario) you’re strategic, well-thought-out campaign becomes the background lighting for a Sophia Coppola film. Cool? Yes, but not likely impact your business objectives.

The futurist Arthur C Clarke famously remarked, “any sufficiently advanced technology is indistinguishable from magic.” While that magical feeling is harder than ever to engender, it’s still possible with some digital displays — especially ones with hi-res, matte finish screens. These displays can make a still image look like a high quality print.

When that print suddenly starts moving or talking, it can make you feel like you’ve stepped into a J.K. Rowling novel. (That’s especially true if you happen to visiting Disney World’s Wizarding World of Harry Potter, which uses the matte finish screens in elaborate picture frames to recreate the talking paintings central to the iconic book and film series.)

Swedish pharmacy Apoteket used this technique to great affect in an anti-smoking campaign. The DOOH display was disguised as a traditional bus shelter poster.  When a smoker passed by, the model in the ad would cough. The campaign was controversial (loved by some, considered passive aggressive by others), but definitely made a strong, memorable impact on those who encountered it. It is important to note that this was not a PSA, but rather a promotion for the pharmacy’s line of smoke cessation products. 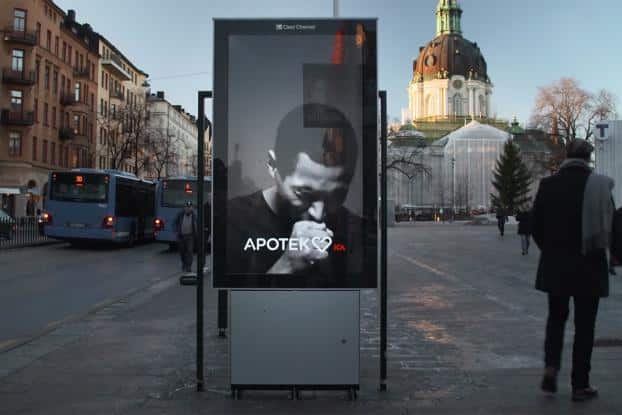 A similar Apoteket ad located in a subway station featured what appeared to be a smiling model. When the trains arrived, however, her hair would blow furiously in the wind. A not-so-subtle reminder the chain sells hair care products.

Consumers stuck in an airport, subway station, tradeshow or simply walking through a mall are an ideal audience for DOOH displays. These are among the few situations, in which people are often purposefully looking for information on signs and window displays instead of their phones. (Siri won’t give you directions to your departing gate… yet.)

Mazda recently created a DOOH display ad in Toronto that exemplifies this concept. It featured gorgeous, subtly-moving videos of the sleek new MX-5 RF from various angles. When people turned their head to look, sensors in the sign recognized the motion. The total number of “head turns” was listed on the display — a unique and powerful way to reinforce that the car creates draws attention, which is exactly what the target buyers are looking for.

Another captive, and willing to engage, audience can be found at tradeshows. The brand with the exciting digital display is almost guaranteed to get more interest and traffic than any of the ubiquitous, vinyl-wrapped boxes. On the flipside, if you’re in a high wow factor tradeshow like CES, a quality digital display (and killer concept to go with it) is the bare minimum of what you need to compete.

These three tips can help you create powerful and effective DOOH experiences. In the end, it is not the display but the creativity and humanity with which you use it that counts. By itself, the technology of DOOH may not blow a modern consumers mind. Great content, however, definitely will.