People Like to Connect: The Power of Connection is a Curious Thing 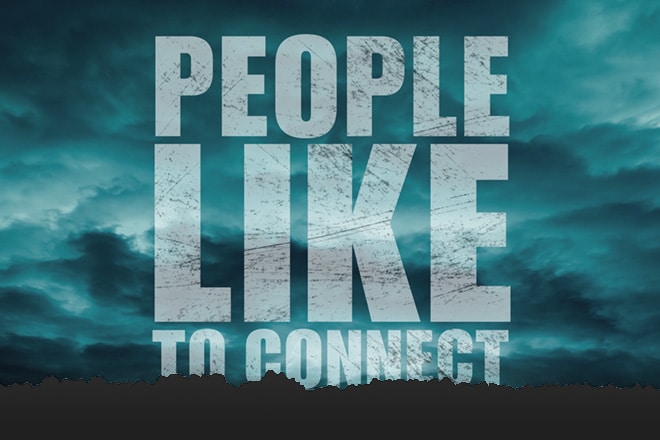 People like to connect. We have an innate requirement for interpersonal communication and belonging. We like to form relationships and connections with one another. We enjoy sharing our interests and we strive to find commonalities with strangers, developing them into friends. We need the presence of others to feel human and to fulfill social voids in our lives.

Making connections with other people propels humanity forward. It creates a foundation for debate. It affords the opportunity for a different perspective. It drives social change. And it sells.

Hollywood and the entertainment industry understand this reality better than most — they are in the business of connecting people. It’s the reason why millions of dollars flow in and out of the hands of the entertainment world every single day. And it’s a contributing factor in the mass consumption of the Internet and digital technologies.

Hollywood’s effective marketing strategists live to share. That’s how the money is made. The fan bases are built by creating buzz, heightening anticipation and then delivering a product that is so enjoyable we want to immerse ourselves in it. We want to find others who share our enthusiasm. We’ll buy the CDs; we’ll throw the house parties; we’ll enter our YouTube videos into a contest; we’ll tweet, post and Digg it until it’s the number one trending topic in the world.

We let movies, music and television affect us and we love them like they were meant just for us (oh, and that entire group of people on the discussion boards and blogs). We do this because we desire… no, we demand to be connected.

When the entertainment industry finds a gem — like recent moneymaking hits Harry Potter, LOST and Glee — time is of the essence. Using technology as a resource to build and sustain buzz becomes critical. Sometimes, the future success of these gems is unknown until unleashed on the general public and allowed to breathe on their own.

Unfortunately, some marketers forget the importance of recognizing and speaking directly to their myriad of different audiences. The most common barrier is the difference between the offline fan and the online fan. Bridging the gap between the two can be difficult but there are ways to satisfy both parties. Here are a couple of examples of entertainment brands that understand how to do that:


Glee was certainly a different stroke for audiences. This marriage of music and TV had Ad Age favorably comparing Glee to “revenue juggernaut” American Idol. Ryan Murphy, Co-Creator, admitted Glee was not initially expected to be an explosive hit. With the release of CDs featuring popular song covers that were sung on the show, Glee revenue blasted skyward.

And producers understand how to make the most of the monster they’ve created. They created a sub-culture of show groupies called “Gleeks,” success DVD/CD releases, sneak previews and interview exclusives on YouTube, an iPhone app, and a “Karaoke Revolution” video game. They’ve also taken the brand offline, too. By introducing a multi-city Glee performance tour and exclusive retail merchandising lines, they found ways to connect to audiences who want a more personal, offline experience.


Another larger, cinematic example is the Harry Potter series. What began as a great story concept for J.K. Rowling has transformed into a series of eight blockbuster hits. Through word of mouth buzz about the books themselves, readers started the frenzy. Predominantly, the mega-fans of HP are those who devoured the books just as quickly as Rowling could write them … and then they passed them to a friend. From a desire to connect with one another and discuss the books, fans were the first to take the brand online by creating websites about the books. Teasers, released by marketers of Harry Potter, largely influenced the waves of buzz around Harry Potter. Users were able to watch exclusive content online and were able to use text messaging and other mobile resources to get more Potter. The biggest move the Harry Potter brand made offline was the creation of The Wizarding World of Harry Potter theme park at Universal Studios Orlando — a world where adults and kids alike can experience Hogwarts school of magic and interact with Harry Potter characters.


Everyone remembers LOST regardless of whether you watched the show or not. According to a 2006 article in the NY Daily News, Mike Benson, Senior VP of Marketing at ABC, “[ABC] wanted to create something that was a deeper, richer experience for fans and give fans something to carry them over between seasons… We see it as a kind of scavenger hunt meets a jigsaw puzzle.”