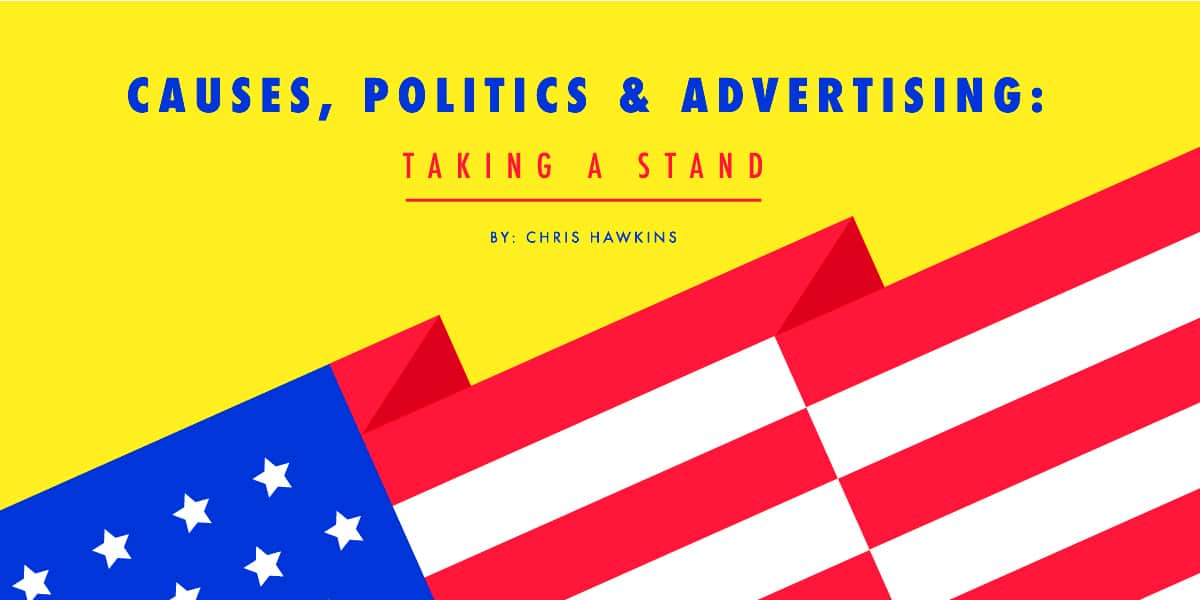 During the hours and days following a tragic or trending event, it’s now common for major brands and personalities to come out and make a statement on the subject. For a quick example, the Oreo’s tweet during the Superbowl.

In an age of up-to-the-second media distribution, timing is everything when a brand wishes to throw their opinion into the public eye. Say the right thing at the right time, and you could win over a whole new breed of consumer, the Millennial.

But the pressure of jumping on the hype of a hashtag often causes under-experienced media managers to say the wrong things at the right time, potentially causing serious backlash, up to lost customers.

Campbell’s Soup recently ran an ad simply featuring two men, at home, feeding soup to what the setting suggests is their son.

In the background of the shot is, very subtly, a child’s ring toy in the seven colors of the rainbow. This is hardly making a statement of a cause, but really simple painting a more realistic slice of a contemporary life.

Nevertheless, Campbell’s Soup’s Facebook page ran rampant with comments against same-sex marriage and same—sex parenting. Instead of deleting, or ignoring, the comments, Campbell’s Soup handled with grace and humor. By doing so, Campbell’s showed a traditional brand nod on a social topic, while not alienating their broad audience to drastically.

Often a hard lesson learned: What’s right for one company, product, or service may not be right for the next. Through analytics, contextual inquiries, interviews, personas and surveys, consider your core audience and what strategy could be most effective to raise awareness as socially conscious corporation or organization. Otherwise, it may result it lost consumers.

Public displays of compassion and empathy not only impact the customer-base, but the retention and attraction of talent, as well.

Public audiences now have an expectation of corporate and CEO engagement regarding current events. Weber Sandwich’s CEO Activism in 2017 reveals 47 percent of Millennials believe CEOs have a responsibility to speak up about issues that are important to society.

Corporate engagement and humanity is now seen as a job perk. Millennials are more likely to be attracted to, persuaded to buy from and spread the word on social media when they see a company taking action over hotly debated current issues.

Unless your product or service is unique or revolutionary, it is almost critical to showcase some stance on social awareness. On average, Millennials would be willing to give up $7,600 in salary to work at a job that reflected purpose and positivity. Millennials are an awoken generation that is passionate, diverse, and mindful of the power of their dollar and the value of their presence.

“I think every generation has the responsibility to enlarge the meaning of human rights.” Tim Cook, CEO, Apple

If you feel your brand should take a stance, only do if it is natural, honest, well thought-out and, most importantly, resonates with your brand. Otherwise, it appears inauthentic. And Millennials pick up on insincere claims.

In the case of Campbell’s Soup, their brand has always represented the warm, loving comforts of home and family. It makes all the sense in the world to adjust their message for a contemporary audience. It’s honest, represents their message and is subtle and gradual, showcasing their awareness of the several previous generations that continue to buy their products and support their brand.

And, honestly, scary, to state an opinion within the broad consumer landscape. Traditionally, it’s been in a brand’s best interest to avoid controversy. But  in doing so, your brand has to be OK with possibly alienating a percentage of potential customers.

If your brand has nothing to do with the cause it’s publicly supporting, Millennials – again, that can seemingly sniff out fake news – will see through the authenticity as what it actually is: A desperate effort to win them over.

Millennials are well-informed, highly skeptical, aware they are being sold to, and aware of their value. According to a study by Elite Daily, only 1 percent of millennials surveyed said that an advertisement would make them trust a brand more and 43 percent rank authenticity over content.  They wield immense power of persuasion through social media, and are 45 percent more likely to refuse a company’s products or services after learning that a company is not in touch with cause awareness or environmentally responsible.

Unless you are prepared to defend your position, any trust you created with your customer is a risk of being destroyed with one bad ad.

Go Beyond the Ad

LEAP has a philosophy through which they funnel every message: Market Less, Matter More. When you think about pushing your brand into the view of the current generation of consumers, you have to realize Millennials have been advertised to their whole lives.

The traditional advertising landscape is changing. Commercials promising a more exciting lifestyle by celebrity spokespeople and closing on catchy jingles are quickly becoming extinct. What sells to Millennials are not front-page newspaper ads, but ever-changing, viral Reddit front-page posts of brands donating money and time to a cause, for example JetBlue’s immediate and meaningful response to the tragedy in Orlando in 2016 where fees were waivers to travel to/from Orlando, donating $100,00 to the #OneOrlando Fund in the name of crew members.

But let’s be honest. There’s no way to make everyone happy. Even when a company or organization doesn’t out rightly make a statement regarding a cause or political stance, there’s always a chance for controversy.

As brands are often unveiled as promoting dishonest practices, CEO’s with less-than-savory pastimes, or even just loose policies on social issues, it’s best to tighten up ship and make a statement when the time is right and it supports a core value. In the new Millennial marketplace, the best defense is being boldly offensive to the less socially aware.

Should your brand take a stand? The short answer: It depends. Will you start a fire or a revolution? Predicting consumer support and fallout is not an exact science.

When considering making a public statement in regard to social responsibility or to speak out for or against a cause, make sure it speaks from the soul of the company and leadership. Although, not participating on controversy is the safest route, in the end, honesty is always the best policy.